As part of our “Manifesto For A New Wakefield” project, we commissioned Richard Wheater (Neon Workshops) to exhibit a previously unseen piece of work entitled Visible Words From Invisible People. Over a ten week period in 2012, a group from the city’s homeless community worked with artist Richard Wheater, on a project that aimed to develop their visual language through light, to communicate their predicament to the wider public. The results were a series of extraordinary neon signs which were displayed in empty shop windows during the festival. Afterwards, they were all auctioned for charity. 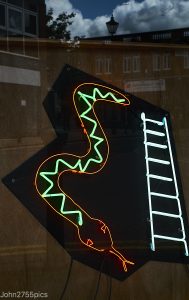 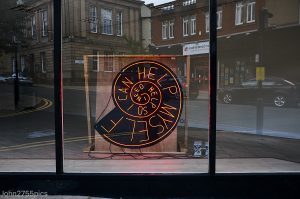 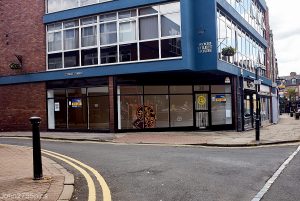 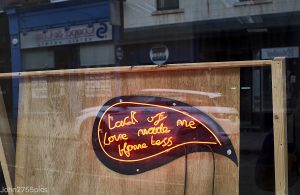 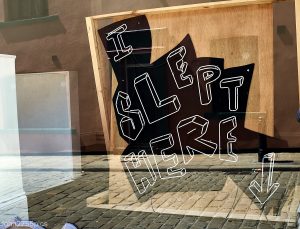 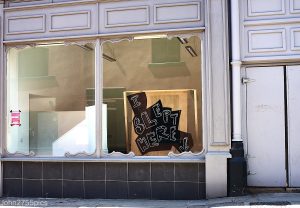 The Long Division commission was to exhibit the Visible Words… works but they had already been created as part of an earlier project. Can you tell us more about how that originally came about?

I was invited by Pennine Camphill Community to propose a Wakefield based project.Wakefield’s growing homelessness was on my mind, spending time with them it was clear that isolation and a disconnectedness from society were re-accuring themes. By designing their own neon signs, a desperate situation could be communicated positively and creatively.

The pieces were exhibited in empty shop windows for the festival. Why do you feel this was important for the commission to be effective?

Whilst one empty shop can speak opportunity for a brave entrepreneur, several empty shops on a street suggest failure. Failure of previous tenants to make it work, failure of the Landlord to listen, understand the local economic climate or their tenants hardship, a failure to listen and care. The locked empty spaces, their door steps often used by rough sleepers, was both poignant and relevant as the setting for Visible Words From Invisible People.

We got a great response over the weekend, with lots of people searching the pieces out, taking photos and sharing online. There’s something magical that people love about neon, have you ever put your finger on what exactly that might be?

1) There hasn’t been another material in the last 100 years that’s infiltrated our culture more, whether through war, propaganda, music, movies, theatre, art, architecture, retail, fashion… it has always enjoyed waves of popularity.
2) It’s made by skilled human hands, the notion of ‘craft’ is again gaining favour, whether its a well crafted coffee or craft beer etc as a niche reaction to the disconnected aesthetic of technology such as ‘printed’ objects or virtual reality.
3) It’s the rarity and preciousness of lightening in a bottle. Neon is just gas (from the air we breathe) in glass, excited by an arc of electricity – a mini lightening bolt. You are looking at the newest discovered fourth element: Plasma. Fire is plasma. People rubber-neck at a neon as they do an open flame.

Do you feel this commission enabled you to do something that would have otherwise not been possible for you as an artist, or allowed you to experiment in any way?

There had been plans to exhibit the neon signs in Wakefield empty shops, but not the political or financial support required. The project was crated costing money in storage, with discussions of de-commissioning the work. It was satisfying to finally complete the project, raise awareness and money for a relevant local cause.

Hosting a music/arts event at 7A (the warehouse I lease) in September: ‘Erased Tapes Northern Showcase’. I’m creating and choreographing responses to the three performers sets throughout the late afternoon/eve.