[foh-toh] was a project by WE ARE, an innovative photography led way to capture the events and moments of the festival. The results of the commission will be unveiled at an exhibition launching at the July Artwalk in Wakefield Beer Exchange. 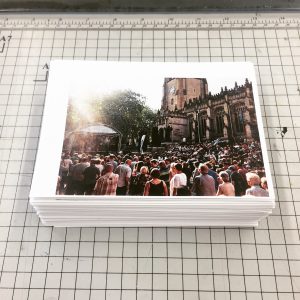 We spoke to Amy and Lucy about the project:

What was the idea behind the foh-toh project and why did you feel it was especially suited to Long Division?

foh-toh came about through our personal interest in photography and our love for our home city of Wakefield. We thought what better way is there to capture what Wakefield has to offer than inviting people to document the city themselves through photography. We’ve seen similar projects before where groups of people have gone out with cameras to document an event, which we thought was a great base idea for this project. We decided to use disposable cameras as we want to encourage people to use film, and a disposable camera is so accessible and easy to use. Most people have experience buying a disposable for a holiday, a wedding or a gig (which is why we thought it was so well suited to Long Division), so it allowed people who didn’t have any experience of photography to go out and get snapping without getting caught up in any technical details.

We run a lot of events and projects in Wakefield and are always frustrated with the lack of photos that are taken and how these things can just come and go so easily without it leaving much of a trace. foh-toh gave us the opportunity to document what happened in Wakefield over those 5 days covering both Long Division festival and the Artwalk, creating a really unique archive of that time. For Long Division 2014 we both went out with cameras and took loads of photos of the day. It was so much fun and it’s always nice looking back at memories, so we really wanted to encourage other people to do that as well. Photography we think is the best way to reflect and document your life, and we feel this project has really made people look at Wakefield in a different and positive way. 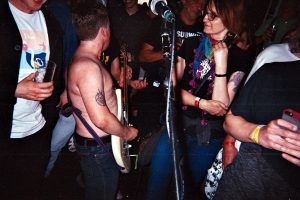 Tell us about the people who were involved as photographers.

This first initiation of the project for Long Division was quite small, so we wanted to keep it focussed. Initially we invited people that we knew would want to take part, as well as doing an open-call for interest for the spare cameras. We tried to invite people from all different backgrounds, different ages and varied photographic experience. As much as we wanted the results to be a strong selection of good quality photographs, the participants didn’t need to have any photographic experience and we think the project has been made much stronger because of that. The one thing we did need from our participants was a strong connection to Wakefield, whether that was through living here or working here. This strong connection with people and place definitely comes through in the photographs taken. 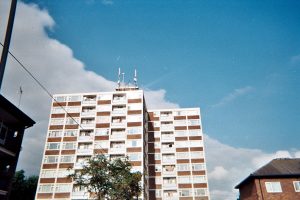 How did they find the experience, and how was it for you collecting and curating them all? (how many photos were there?)

What we love so much about this project is how every person who participated took it in a different direction. Some were really focussed, knowing exactly what they wanted to photograph and others were completely random. Everyone got something different out of it, whether that was to use it as an extension of their artistic practice, to explore personal interests or to just have a go taking photos on a disposable camera for the first time. People were so excited about taking part, it really triggered peoples photographic interest which is a real legacy to the project we think.
Collecting all the cameras and then getting them developed and scanned by Max Spielmann was like Christmas when we got them all back! With there being 30 cameras and a total of 581 photographs that came out we had to be quite quick and brutal with the process. That was really hard because there are so many great photographs in their own right, but we’ve had to look at them as a collection and how they will look together. One photograph on its own might not look that strong but then when you place it next to someone else’s suddenly a narrative appears so we’ve tried to consider that as well when selecting for the exhibition.
We decided not to show the participants their photos straight away as we wanted to spend time sifting through them and curating them. It’ll be really interesting to see everyone’s personal opinions on their photographs as everyone likes and sees different things in their work, and have their own personal reason for taking the photo which we aren’t aware of when we’re selecting. 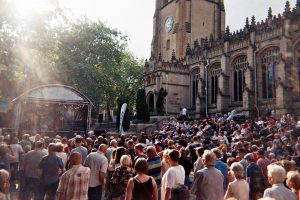 Do you feel this commission enabled you to do something that you would not have been otherwise able to do, or experiment in some way?

We’ve always wanted to do something focussed around photography as we’ve never had the opportunity to do so before, so it’s been great to have the chance to run this project. It’s definitely something that has emerged on its own through personal experience with photography and our interest in Wakefield. This project allowed us to set some clear boundaries for the group such as it using disposable cameras, having only 24 photographs to take each and it having to document Wakefield over just 5 days. This really helped launch the project and made it really simple for people to get involved, and the money allowed us to cover all of the costs of the cameras, developing and scanning which made it even more accessible for people to take part. It’s also given us a chance to curate a very focussed group exhibition, from the selection process to installing the show, and work with lots of new people which is always really exciting. 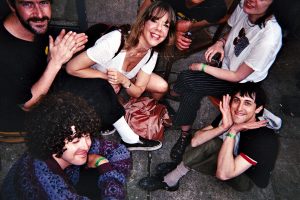 What will happen to all the photos?

All of the disposable cameras were developed and scanned and we’ve now been through and selected several of our favourites from each participant. We’re going to be installing our favourites in an exhibition at Wakefield Beer Exchange which will launch on the Wakefield Artwalk on Wednesday 25th July 17:00 – 21:00 and be on show until Sunday 23rd September. We’re really excited to see everyone’s photos come together to tell a truthful and inspiring story about Wakefield, and for the participants to see them all together for the first time! All of the prints in the exhibition will be for sale and we’ll also be producing a number of postcards featuring our favourite photos. A selection of the final photographs will also be included in Long Division’s ‘Manifesto For A New Wakefield’ book which will be launching later this year. 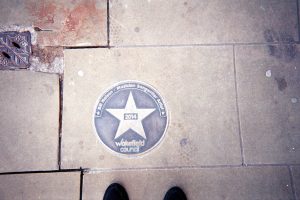 We had no idea what to expect from the project, but the outcomes have been so much more than we could imagine so we 100% want to continue running it. We set up an instagram account for foh-toh before the physical project began to encourage people to document Wakefield and look at the city in a different way, and it was a way to engage with lots of people that weren’t able to take part in the Long Division project. We’ve loved people sharing their photos with us using #fohtoh , and it’s becoming a fantastic archive of images of the city. We’re going to continue running the account, encouraging people to photograph and share their images of Wakefield and we want to start running instagram takeovers which will give anyone the chance to share their photos.

The project worked well having a focus to document Wakefield and Long Division in 5 days, so we’d like to run a number of other focussed projects that would see us continuing to work with lots of other people and explore new themes and ideas. We have no plans yet for what may look like but we’re open to discussing it with the participants and seeing what people would like to see from the project. This could be regular exhibitions, group meet ups and crits, experimental themes for everyone to explore, anything really! It’s exciting to think that the project is only just beginning and we can’t wait to see where it will take us all.