Toria Garbutt’s “Cup Of Tea & Me” was a commissioned piece of work at this year’s festival. We were really interested in the places in the city where ideas are formed – not in board rooms, but in these social, informal spaces. We were also interested in the people who frequent these places, the Wakefieldians for who that cup of tea is a moments respite, a chance to socialise, or a space to dream. We felt Toria was the perfect person to capture these ideas and commissioned here to write five poems for five places in the city centre that met this brief and idea. They were on display at the festival on June 2nd and remain in place at the venues. 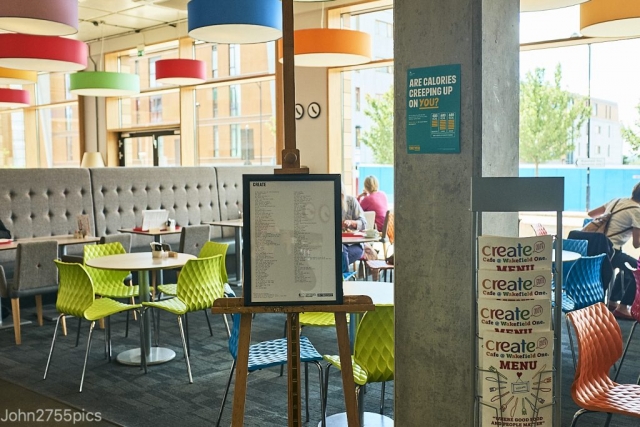 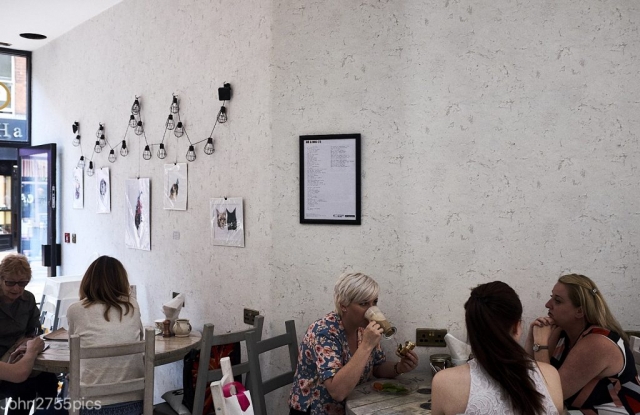 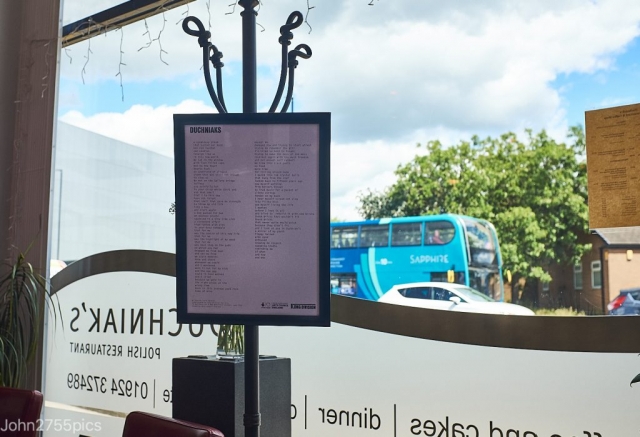 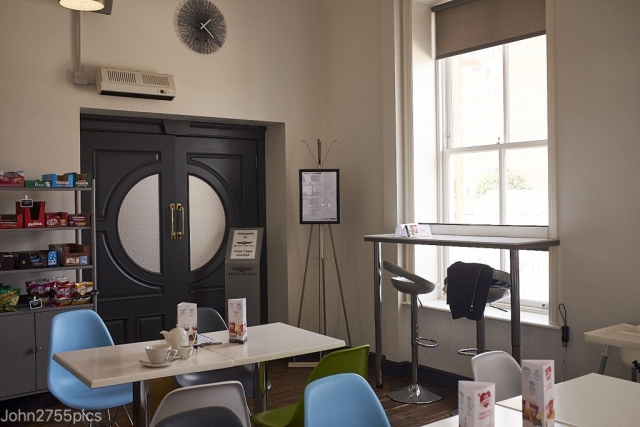 The initial loose idea Long Division pitched to you was poems written and created in places where ideas are formed, where people meet and socialise, the informal places in the city and the people who go there. How did that develop once you were actually out in Wakefield?

I approached a mother and daughter sitting in Al’s  tearooms and we got talking. They told me their husband/dad had just died and that they’d started to meet up in Al’s once a week. That they’d started going there on the way home from the hospital when he was still alive. I got thinking about routine and ritual and their importance in keeping us functioning and alive. Their relationship mirrored mine with my mum and it became clear that was the story I wanted to tell.  About the bond between a mother and a daughter, about how death changes dynamic and creates new spaces. About how a cup of tea is both scared and ceremonious. I talked to the cafe owner about his mum, about how she used to come to the cafe when it was still Val’s. About how she was proud of him. We talked about Val and how rumour has it she is rich and retired. So the poem became about that too, a celebration of women and mothers, their resilience and strength. There was a  young mum in the cafe too, struggling with her kids, as was I on that particular day. So all of that channelled in.

In Mr and Mrs C’s the stories I collected were about young love standing the test of time.  I spoke to the owner and then a regular customer, an elderly lady, and the message behind their stories, again in a beautiful stroke of serendipity,  was the same. So I wove their stores together.

What was it about the five places you chose in the city centre that made you pick them?

I wanted to celebrate Val’s/Al’s because it’s such a well known and well loved cafe.  Mr and Mrs C’s appealed to me because I’d heard they serve vegan afternoon tea with cake and I wanted to sample it. I love the ethos behind Create and the messages on the walls, the mix of people in there.  In the end I told my own story about my experience in there that day, forming a bond with an old friend’s daughter over a drink. I chose Kirkgate because I spent so much time in that area as a teen, in that space where the cafe has been built.  I remembered standing out on the platfom, unsheltered, and the poem was built around that idea. I wanted to pay homage to that time in my life, those vital, intense friendships. It’s also about young love, but a different kind to the one in Mr and Mrs Cs. This one is about the mad, passionate kind that burns fast and bright and out.  Duchniak’s tells the story of forbidden love. The cafe reminds me of a speak easy, hidden away and lavish and I wanted to embody that. The cafe is the affair personified. The cups are filled with lust. It is “foreign like us in this new world”. In one way or another each poem is about love or loss of. I suppose that is not just true of the poems but of all people.

Was a commission that was purely writing – not performance – a different challenge for you, or did it make you approach it in a different way?

The poems are different in form from my performance pieces because I was conscious of how they would sit on the page. It was interesting for me to reach out to strangers and tell their stories.  I wanted them to know they are poem worthy. Everybody’s stories are. We all have them. My author friend said to me that all the best stories are in our head, we just have to tell them. And it was a pleasure for me to tell other people’s for them.

And do you feel the commission let you create something that wouldn’t have otherwise existed, or to experiment with your style / skills in some way?

Yes definitely. I think it’s good to be challenged and to write out of your comfort zone.  I would ordinarily tell my own stories of those of people in my life. Asking strangers to tell theirs for me to write about was a new experience.  I would say the pieces are page poems and that the flow is different from what I would normally write.

We’ve had great feedback, including people being moved to tears. What do you hope people who come across these poems post festival will feel?

I hope people will think about love and family, about their mothers and lovers and friends and children.  I hope they will think of their own stories as beautiful and see how they could turn them into art just by writing them down.  I hope they see that poetry is not a mystical inaccessible language for the privileged elite but words for us all, from the heart.  I hope people will think of their own memories of Wakefield and the importance of cafes.

I’m launching my book The Universe and Me  next week in Manchester and I’m back on tour with John Cooper Clarke in July.  I’m also working on a word and music collaboration with fellow poet and performer Louise Fazakerely and continue to deliver poetry sessions in schools and Hull HMP.