We commissioned Wakefield musician and producer Jamie Lockhart to create a brand new feature length show based around a generations old family songbook. The premiere performance took place on the first day of the festival (May 30th) at the newly opened Walker Studio at Wakefield Theatre Royal, a sold-out performance. 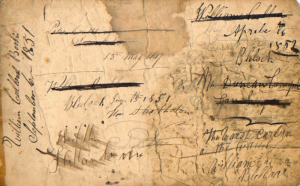 For those that didn’t see the show, can you briefly tell us about the story behind the songbook and how it ties in with Wakefield?

The songbook has been passed down through my family. The last people to use it were 5 generations back, my great great great grandfather and his brother shared it. The grandfather was a song writer and singer and the brother was the head piper to Queen Victoria. I have now lived in Wakefield as long as I lived on the far north coast of Scotland, and I wanted to create something that celebrated these two elements. Rediscovering the songbook provided a great platform to spring from, and I used the traditional tunes from my past and worked them in with my own style that has developed while I’ve been here in Wakefield.

You have always released your own music as Mi Mye, working with other musicians – how was it to tackle something on your own, under your own name?

It was scary, totally the most nervous I have ever been. Even though Mi Mye shows have often been solo shows there is still a small divide between me and the performance, whether this is a good or bad thing. But doing a sold out show under your own name is something very different. The stories had to be totally true with no exaggeration with is very different for me, and the fiddle had to be totally in tune.

As an artist, do you feel the commission allowed you to create something new, or experiment with how you usually work?

This commission gave me time to work, I did not have to squeeze it into evenings after finishing work or just on weekends. I took time off and could experiment a little, strip it back to the bare bones of a song and see just how simple and honest I could make it. It let me experiment with simply playing a piece of music with no drama or hype. This was such a liberating process for me. It felt that the loud exciting part of this could just be a slightly longer pause or if I just hit the low stings a little harder.

How do you think the show fits into the idea of a Manifesto For A New Wakefield?

Wakefield is an amazing city to create stuff, it has very little interest in being part of a particular movement and that means what you can create is free to be anything. I think this fits in with the manifesto perfectly, a show about the north coast of Scotland, Wakefield, a long lost book and love.

How was the show for you and do you feel the show was well received?

This show was the best for me and it was so exciting for it to sell out beforehand. That’s an amazing experience for an incomer to a city to receive so much support. I love the Theatre too, I worked there for a few years a while back, and I have always felt that the Theatre saved me, and they introducing me to my true love.

I am going to release a new record with Mi Mye, this was already in the pipe line when I started the commission show but we just popped it on hold till the commission was done. Then I’m planning to record the pieces from the show and take the show to other Theatres and venues around the country.